This week, as the details of Sarah Everard’s horrific ordeal have unfolded, there’s been a palpable climate of fear. An overwhelming sense of helplessness and rage has been keeping me awake at night. It’s hard to know what to do with these feelings, isn’t it?

I talk a lot about self love, but today I want to talk about self defence. After all, part of looking after ourselves is trying to make sure that we are physically safe. I’m not by any means suggesting that self defence is the solution to the recurring violence toward women – there is SO much work that needs to be done on keeping us safe. However, I want to share something that has at least helped me feel a little bit more in control. Please feel free to comment or message me if you have any questions at all.

During my lifetime, I have experienced several terrifying instances of being stalked, harrassed, raped, and I even witnessed a man stab his wife to death. I know first-hand how it feels to be paralysed by fear and eaten up with self-blame and misplaced humiliation. Five years ago, I decided it was time to learn a martial art so that, if I ever need to again, I can attempt to defend myself more instinctively. So I started Kung Fu classes, and I’ve never looked back. As well as being steeped in fascinating tradition, and amazing for flexibility, strength and general wellbeing, Kung Fu has taught me a lot about what self defence means for a woman.

The core principles of all martial arts are very effective for self defence but White Crane Kung Fu is the only one that was actually created by a woman, centuries ago in Southern China. This style suits a female, as it’s more about evasion and attacking your opponent’s vulnerabilities, instead of using physical strength. Recently, I inteviewed my inspiring White Crane Martial Arts instructors, Russell Suthern and Shafagh Amiraftabi, to ask their expert advice on self defence for women. Please note, their following tips are for illustrative purposes only and must be taught to you by a qualified instructor: 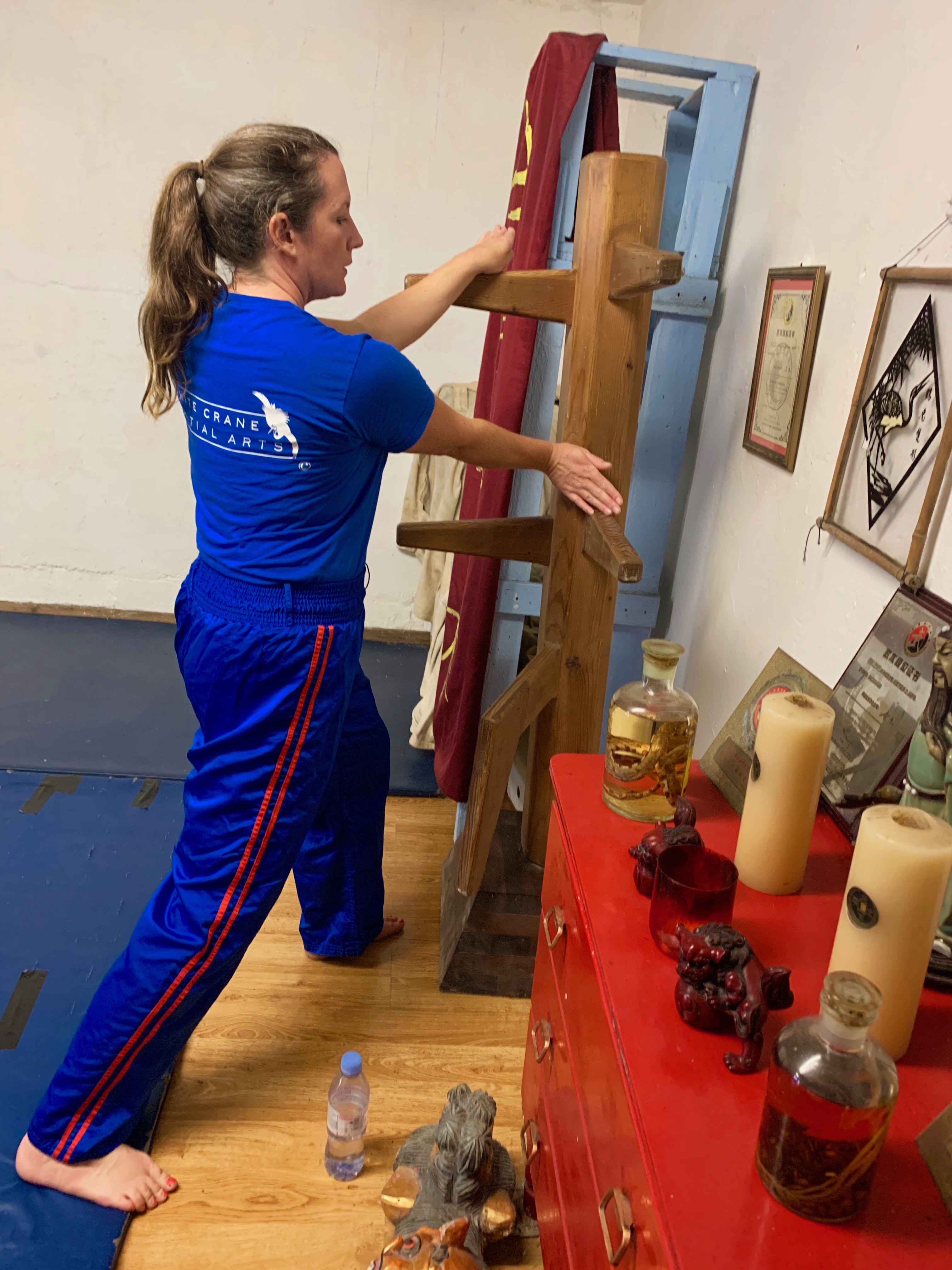 90% of self defence is awareness and avoidance

The vast majority of the conversation around self defence should be about avoidance; being aware of your surroundings and making sensible decisions. For example, when you take a road safety course, you mainly learn about how to avoid being hit by a car, not what to do if you get hit. You learn about having to stop, look and listen, to use zebra crossings etc. It’s the same principle with self defence. To use that road analogy – we don’t completely avoid crossing the road in case we get run over by a car, in the same way that women shouldn’t have to stay home to avoid getting attacked, but it is important to take all the precautions you can. We know that it’s not ideal to live like this but we cannot emphasise enough that you must be self aware for your own safety. If a man is behind you, cross over the road. If you have the choice of taking a cab or walking, take a cab. Make sure you know your friends’ movements and check in on each other. Stop, look, listen.

These fighting techniques should be the last resort

Sometimes things do happen beyond your control and this is when you have to go for a physical response. If you have a weapon, like car keys or mace, then use it. If you don’t have a weapon, use your strongest body part against your attacker’s weakest. Punching isn’t good for self defence, especially if you’re not that big – you’re likely to break every bone in your hand. Here are some basic techniques that can cause a lot of damage, which is why they’re the moves that aren’t allowed in competitions!

The main thing to remember is, once you’ve struck with every ounce of your force and aggression, then run. Don’t hang around; there’s no honour in hanging around and there’s no cowardice in running away. Run to the nearest brightly lit, populated place – a police station, a cab rank, a pub or club. Despite having a bad rep, most bouncers will be more than helpful.

Your psychological approach is as important as your technique. Your attacker is there to hurt you, so you need to get into a ‘it’s me or them’ frame of mind and be ready to inflict pain. You will likely hurt yourself by hurting them, so be willing to cause them more damage and fight tooth and nail to defend yourself. Tap into that animal side, pull something out from within you – that nasty side that we don’t show the world nowadays because we’re all so civilised. In that split second you’ve got to become a different person, when you hit them with that elbow or drive that knee in, it’s got to have intent. You’ve got to give it everything you’ve got and know that these techniques are powerful, even if you’re not that big and strong.

In society, women are often told they are victims to be protected, shrinking violets who can’t look after themselves. But women can fight – they fought in the French resistance, the Chinese army and the Polish army. Watch how a woman whose child is about to be taken away fights. Look at other species, like lions; the females do the hunting while the males just lie around asleep all day. Females will often fight defending their nests or cubs and they’ll do it without compunction, so defending yourself is the same. It is in there, allow it to come out. And you have to become the aggressor; be the hammer not the anvil. Fighting back won’t make it worse. In fact, survivors who didn’t fight back often regret it. Your attacker is there to hurt you, not give you a pat on the head, do not hesitate to attack them.

You will feel scared. We’ve been training for 30 years but would still feel fear at being attacked. Unlike cavemen, many of us can live for years without experiencing the adrenaline surge of fear. These days, when we are confronted with a real danger which is alien to us, we freeze, like a rabbit in headlights, rather than fight or flight. It feels horrible; your legs go to rubber, you can’t lift your arms, your mouth goes dry, you lose perception of time etc. It’s important to know this fear, don’t try and deny it. It’s a natural reaction, showing that you’re in danger. No amount of training or preparation will get rid of fear.

To give yourself the best chance of overcoming that ‘rabbit in headlights’ reaction, practice your techniques regularly and try to stay generally fit. Being fit, fast and strong works in your favour. Embrace the pain of working out because in a real fight you will feel pain. The more physically adept you are, the more it will help you respond better; you can’t control someone else’s body until you can control your own body.  You might want to try a few different martial arts classes and discover what appeals to you. Or you could pick a few of the above techniques, like the palm strike and the spear hand and drill them every day. It’s a bit like neuro-linguistic programming, if you picture someone attacking you as you do it and feel the fear a little, your brain will learn to trigger the instinctive response. This is more effective than a one-off self defence course that you will soon forget.

No matter what form of self defence you learn, don’t let it lull you into a false of security. We still do everything we can to avoid fights. There’s a world of difference between competitions and real fights, they give you a good adrenalin burst but don’t recreate the real horror of being attacked. Remember these techniques are the last resort, awareness and avoidance always come first!

Disclaimer: White Crane Martial Arts and the author assumes no responsibility for any injury sustained while practicing these movements. The techniques included in this article are for illustrative purposes only and must not be performed without the guidance of a qualified instructor. You must not use techniques that have not been taught to you by a qualified instructor.